Cats’ picky eating habits may be unrelated to self-protection 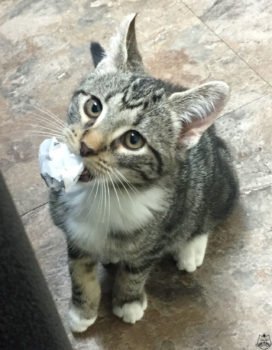 by NEWStat – Scientists have long believed that a cat’s picky eating habits protected it from ingesting harmful toxins. But a new study suggests otherwise.

Researchers from the Monell Center recently found that there does not appear to be a strong relationship between the number of bitter receptors a cat has and its consumption of plants. The study questions the common hypothesis that bitter taste was developed to protect animals from ingesting poisonous plants.

The study was published in PLOS ONE on Oct. 21.

In the study, the researchers first examined DNA from domestic cats and identified 12 different genes for cat bitter receptors.

They then evaluated whether these genes encode functional bitter receptors by incorporating the gene sequence of each receptor into cultured cells. The researchers then probed the cells to determine if one or more of 25 different bitter-tasting chemicals activated them.

The researchers confirmed that at least seven of the 12 identified cat bitter receptor genes are functional, that is, they have the ability to detect at least one bitter chemical.

“Cats are known as picky eaters,” said molecular biologist and study author Peihua Jiang, PhD. “Now that we know that they can taste different bitters, our work may lead to better formulations of cat food that eliminates the bitter off-taste associated with certain flavors and nutrients.”

We offer Nutritional Counseling services for your pet? Our trained and certified staff is available to help you choose the right diet for your pet to keep him or her happy, healthy and active.

Posted on November 10, 2015 by tbvets
This entry was posted in News, Tips & advice. Bookmark the permalink.