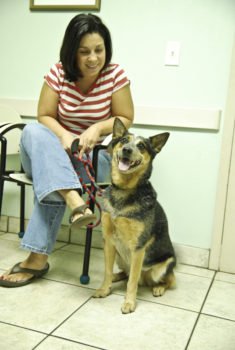 Pay attention to where cases are occurring

“My advice to dog owners is to watch the news and be aware of where the disease is across the country,” said Susan Nelson, a clinical associate professor at Kansas State University’s Veterinary Health Center.

“Unlike human influenza, this virus is not seasonal, so it can be contracted at any time of the year,” Nelson said in a university news release.

So far, the virus has affected at least 2,000 dogs in Illinois, Wisconsin, Ohio, Minnesota, Massachusetts, and Indiana. However, dog owners in the Tampa Bay area should not downplay the risk. Link Welborn, DVM, DABVP, co-owner of the Tampa Bay Animal Hospitals and Chairman of the AAHA Canine Vaccination Task Force explains that “While it may seem odd, the dogs at greatest risk for catching the canine influenza virus are those that live in areas of the country, like the Tampa Bay area, where there has not been an outbreak of the disease. This is because the population of dogs in areas where there has been an outbreak develop immunity to the disease by exposure to the virus. Since there hasn’t been an outbreak in our area, there is no “population immunity”. As such, the only dogs that are protected are those that have been vaccinated for canine influenza. Even though we don’t know if the canine influenza vaccine is effective for all strains of the virus, it is the best we can do for now. Accordingly, we recommend canine influenza vaccination for all dogs in the Tampa Bay area that are exposed to groups of dogs, such as in pet resorts and kennels, grooming facilities, doggy daycares, and dog shows.”

This latest bug, identified as a strain of H3N2 dog flu virus, is closely related to strains that affect dogs in southern China and South Korea, according to Cornell University. The virus is not known to spread to people.

Dogs can develop persistent cough, runny nose, fever and nasal discharge from the virus, and some have died. Four out of five dogs exposed to the virus will become infected, and even those without symptoms are still contagious, Nelson said.

“The vast majority of these dogs have a mild form of the disease that lasts for about two to three weeks. They will get better with just supportive care,” Nelson said.

However, about 10 percent can develop pneumonia, which can be fatal, she added. News reports have indicated the more severely affected dogs were less than a year old or older than 7 years old, Nelson noted.

This virus is persistent. “It can survive on inanimate objects like leashes, water bowls, food bowls, brushes and human clothing for 24 hours,” Nelson said.

“It can live on a person’s hands for about 12 hours, so it’s important to wash your hands and use general sanitary precautions like you would to prevent the spread of the human influenza,” she added.

Symptoms typically begin two to four days after exposure to the virus. The period between exposure and the appearance of symptoms is when infected dogs are most contagious to other dogs, according to the news release.

Because symptoms of dog flu are the same as for a common condition called kennel cough, lab tests are needed to confirm the diagnosis, said William Fortney, director for small animal outreach at the Kansas State Diagnostic Laboratory.

The U.S. Centers for Disease Control and Prevention has more about dog flu.

Posted on April 29, 2015 by tbvets
This entry was posted in From Our Clients, News, Press and tagged canine, dog flu, influenza. Bookmark the permalink.