Dogs, Long Believed To ‘Live In The Moment,’ May Remember Events From the Past

Prevailing thought among dog psychologists and dog enthusiasts alike is that dogs cannot recall the past and are essentially stuck in the present moment, but new research suggests that this isn’t true.

Dog psychology researchers long believed that dogs, cute and cuddly as they are, can’t remember events that happened in the past. A new study has brought doubt to these beliefs, as the researchers’ findings suggest dogs could imitate novel human actions based on what they’ve seen, and not practiced.

In a paper published in Psychological Bulletin, author William A. Roberts argues that the ability to “assign points in time to events arises from human development of a sense of time and its accompanying time-keeping technology.” He says that animals have no sense of time and are cognitively stuck in time, and therefore have no episodic memory. Episodic memory, together with semantic memory — the ability to understand meanings and concepts — allows beings to recall facts and knowledge, an ability known as declarative memory.

To see if dogs could display these types of memories, researchers from Eötvös Loránd Universitym, in Hungary, had the owners of eight adult dogs train these dogs in a “do as I do” method in which the owners made their dogs sit and watch as the owner performed novel tasks, including ringing a bell and walking around a bucket. Each dog watched the owner perform these tasks for 1.5 minutes. For some tasks, the dogs were allowed to copy the task (a two-action procedure), while for others they were only allowed to sit and watch.

Then, the dogs were taken behind a screen that hid the objects used in the tasks from their view. During this break, which lasted between 40 seconds and 10 minutes, they were distracted by playing or just doing whatever they wanted.

By doing this, the researchers were able to see if the dogs had an ability to encode and recall the tasks without ever practicing them themselves, and they did. When the dogs were brought back, whether it was the owner or a stranger — who acted as the control — that commanded “do it,” the dogs typically performed the task. Dogs could complete the two-action tasks after waiting as long as 10 minutes behind the screen. They were also able to copy the tasks that they were only able to watch, spending only one minute behind the screen for these.

“This would be so-called declarative memory, which refers to memories which can be consciously recalled, such as facts or knowledge,” the authors conclude.

Posted on August 16, 2013 by tbvets
This entry was posted in News, Press and tagged behavior, canine, dogs. Bookmark the permalink.

Virtual Care… 24/7!  Videochat with your Veterinarian using the Airvet app. 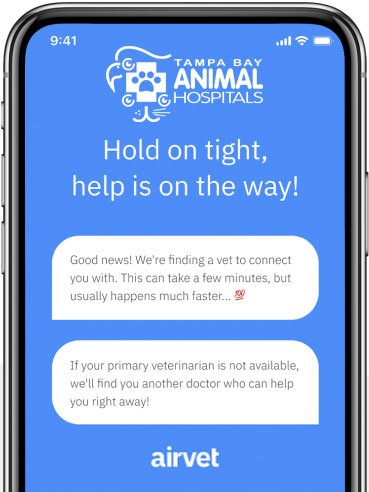 We believe that access to pet care should extend beyond the walls of our office. For help, questions, concerns, or to do virtual follow-ups, Videochat with one of our vets - with our new Airvet app.

Download the Airvet app from the Google Play Store or App Store.