With dogs, it’s not just what you say but how you say it 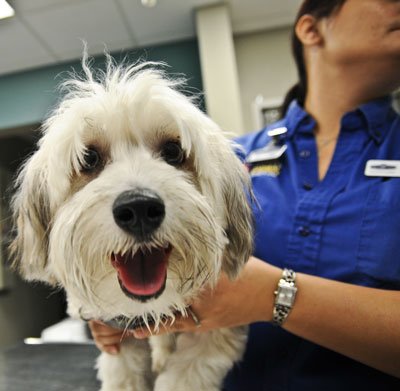 When it comes to canine patients, matching the pitch of your voice with words of praise isn’t just natural. It is also the most effective, according to a new study. Researchers from Eötvös Loránd University in Budapest, Hungary studied how dogs process speech and concluded that they are a lot like humans. In fact, dogs use the left hemisphere to process words, and the right to process intonation. Further, praising triggers a dog’s reward center when both words and intonation match.

The paper was published in the American Association for the Advancement of Science’s journal, Science, on Aug. 29.

The researchers trained 13 dogs to lay motionless in an fMRI brain scanner while they measured the dogs’ brain activity as a trainer used both praise words and meaningless words with both praising and neutral intonations. As they did, the researchers watched for brain regions that differentiated between meaningless and meaningful words, or praising and non-praising intonations.

“[Our study] shows that for dogs, a nice praise can very well work as a reward, but it works best if both words and intonation match,” said lead researcher Attila Andics, PhD. “So dogs not only tell apart what we say and how we say it, but they can also combine the two, for a correct interpretation of what those words really meant.”