Help! Does my dog have OCD? 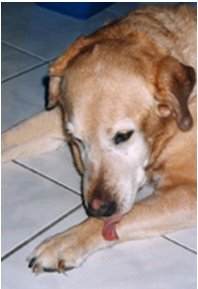 Just like people, dogs can have compulsions that cause them stress and anxiety. Here’s what you need to know about compulsive behaviors in your dog.

Obsessive Compulsive Disorder (OCD) in humans is characterized by repeating thoughts (obsessions) and activities (compulsions) that cause stress. The thoughts are often not based on reality and the compulsive behaviors interfere with one’s life activities.

The cause for humans is believed to be multi-factorial and new advances are being made. Because dogs’ thoughts are difficult to define, the canine version of this disorder is simply referred to as Canine Compulsive Disorder (CCD). CCD is believed to be a good human model for OCD. Multiple studies have found parallels in brain structure and even identified specific gene analogues when comparing affected humans and canines.

One example of a studied disorder is a phenomenon called flank sucking, usually in Doberman Pinschers, where the dog will repeatedly suck on an area of his body to the point of life interference. Like the human compulsions, this activity is thought to be a method of self-soothing. Sometimes these behaviors are referred to as stereotypic because they are repetitive and serve no obvious purpose.

There are other examples, many in purebred dogs, suggesting a genetic link. The stereotypic behaviors are defined as abnormal because they seem to lack a true purpose, are frequent, repetitive and can impact the quality of life in a negative way.

MRI and other diagnostic modalities have demonstrated actual structural differences in the brains of affected dogs that appear analogous to the structural changes in affected human brains. One study, in Dobermans even narrowed the compulsive findings down to a specific gene.

If you have noticed your dog engaging in repetitive behaviors, it is critical that you involve your veterinary team. Because our patients don’t talk, no part of the diagnostic work up should be omitted. CCD is a diagnosis that should be made only in the absence of another medical syndrome.

It is important to recognize that there are truly cases of CCD and affected pets will need medical intervention. But it is equally critical to recognize that because a dog cannot discuss his thoughts and behaviors, he could be displaying them for an entirely unrelated reason. Consider that a dog is circling because of a neurological problem and his owner decides that he suffers from CCD and that the behavior is harmless and does not seek medical help. The affected dog would then progress into whatever neurological process originally caused him to circle and he could die untreated.

Dogs can exhibit behaviors that could be mistaken for CCD, like pain, injury, neurologic, dermatologic or metabolic disease and these dogs must be examined by a veterinarian and worked up for these other issues first. It would be a tragedy to pursue treatment of CCD while leaving other issues uncovered and unaddressed. Please contact us if you notice repetitive behaviors because regardless of the cause, your dog deserves help.