In Honor Of Memorial Day – 7 Famous Dogs Of War 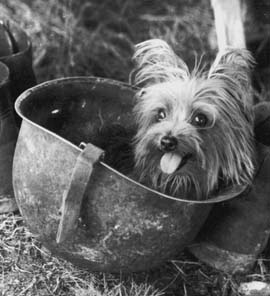 On Memorial Day, our thoughts turn to all of the fallen heroes who fought for our country. In every Military conflict in our nation’s history, you will find stories of canine heroes. Dogs have played vital roles as mascots, guards, trackers and even mine detectors – saving thousands of human lives.

During the Vietnam War approximately 4000 U.S dogs served in the conflict – at the time the Military viewed Dogs of War as “equipment”. After the conflict the majority of the dogs were euthanized. It is only in recent years that suitable veteran war dogs are allowed to be adopted into loving homes once they are retired.

I’ve highlighted 7 of the most famous Dogs Of War on this Memorial Day. Their heroic actions should not be forsaken or forgotten.

Rags was a Cairn Terrier mix who served as the mascot of the 1st Infantry Division during World War I. He “joined up” in 1917 in France and held his title until his death in 1931. Rags was recruited by Private James Donovan, who found himself AWOL after overstaying his leave in Montremere. Just as 2 military policemen approached him, he tripped over the small stray. Donovan thought quickly and said he was part of a search party, sent out to find the Division’s Mascot. Thus Donovan was out of hot water and Rags had a name and a job! Though he was a small dog, Rags relayed messages from the front lines. His greatest moment of heroism came during the Meuse-Argonne Campaign in 1918, when he ran a vital message through falling bombs. Although the terrier was gassed and partially blinded, he survived. Donovan however, was not so lucky. In 1920 Rags was adopted by the family of Major Raymond W. Hardenberg. He is buried at Aspen Hill Memorial Park & Animal Sanctuary in Maryland.

Chips was a German Shepherd/Collie/Husky mix that ended up being the most decorated K9 that served during World War II. Edward J. Wren owned Chips, but donated him to the army (private citizens were asked to donate their dogs to serve). In 1942 Chips began his training as a sentry dog. He traveled the world while serving with the 3rd Infantry Division – seeing North Africa, Sicily, Italy, France and Germany. In 1943, during the invasion of Sicily, Chips and his handler were trapped on the beach by machine gun fire. Chips broke free of his handlers grip and ran towards the fire, attacking the gunmen and eventually causing their surrender to American troops. For his heroism during the war he was given the Silver Star and Purple Heart, but those awards were later revoked (at that time dogs could not be given those awards). He was unofficially given a Theater Ribbon with an Arrowhead and 8 battle stars (for each of his campaigns). In 1945 he was returned to the Wren family.

Photo from US War Dogs Memorial

Lex is a German Shepherd that served in Iraq alongside Cpl. Dustin Lee. Lee was killed in a mortar attack outside Falluja with Lex by his side. The German Shepherd was so faithful to his handler that he had to be pulled away from him to allow medics to attend to Lee. The dog sustained some shrapnel wounds. Lex was present at Lee’s funeral and comforted his younger siblings. Normally military dogs must “serve” until they are 10, but the family of Cpl. Lee was told that Lex would be able to take early retirement and come to live with them given the circumstances. There was much bureaucratic paperwork, but eventually the Lee’s prevailed. At a ceremony a Marine read a statement, “This is to certify that military working dog Lex, having served faithfully and honorably, was discharged from the United States Marine Corps on this 21st day of December 2007″.

Sargent Stubby was the Pit Bull hero of World War I. He enlisted in the most unlikely of circumstances, wandering onto Yale University Field (which was being used at the time for military training)as a stray. His stocky looks and good nature made him the perfect mascot. When the soldiers were deploying, they had a quandary. Most of them would be traveling via mass transit and they couldn’t sneak a dog on with them. That’s when they discovered that Corporal J. Conroy would be traveling in a supply car. At first he was resistant to the idea, but after meeting the endearing canine, he couldn’t refuse. Somehow the soldiers managed to smuggle Stubby over to Europe (he wasn’t a trained military dog), and there his heroic career began.

He managed to alert soldiers to gas attacks in time for them to get their gas masks on, he captured a German spy and even saved a girl from an oncoming car! Stubby almost perished from poison gas as well as a grenade attack, but the scrappy Pit Bull pulled through. After 18 months in Europe Stubby returned home with Corporal Conroy. When he attended Georgetown University Law School, Stubby became the unofficial Hoya mascot. Stubby died in 1926. His body is kept by the Smithsonian museum. Here is a link to Stubby’s Obituary, printed in the “New York Times”,April 4th, 1926.

Smoky is the smallest of the Famous Military dogs on my list! She was a 4 lb, 7 inch tall, Yorkshire Terrier who served in World War II. In 1944 Smoky was found in a foxhole in the jungles of New Guinea by an American soldier who brought her back to camp and sold her to Corporal William A. Wynne for $6.44. For the next 2 years Smoky lived a soldiers life. Because she was not an official military dog, she did not get dog food or medical care. She shared Wynne’s meals and slept beside him in his tent. The little dog even flew 12 air/sea rescue and photo reconnaissance missions, secured in the soldiers backpack. She survived 150 air raids and saved Wynne by warning him of incoming shells. Like many Yorkies, Smoky also loved to learn tricks and preform. She did so with the Special Services – entertaining soldiers in hospitals. After the war Smoky was flown back to the US hidden in a oxygen mask carrying case. For the next 10 years she made television and public appearances in Veterans hospitals until her death in 1957. Smoky is considered the first Therapy Dog.

Sallie was a lady; she was a soldier tooâ€” She marched beside the colors, our own red white and blue. It was in the days of our civil war that she lived her life so true
Sallie was a brindle Staffordshire Bull Terrier (or Pit Bull Terrier – it is unclear) who served as the regimental mascot for the 11th Pennsylvania Volunteer Infantry during the Civil War. She was given to 1st Lt William R. Terry as when she was just 4 weeks of age. Sallie was raised with the men of the regiment and they were fond of her. She knew the specific drum roll announcing reveille. Sallie followed the men closely on marches and to the battlefield, always on the front lines. In a spring 1863 at a review of the Union army, Sallie marched along with “her” soldiers. Abraham Lincoln sat in the center of the reviewing stand and spotted the dog. He raised his famous hat in salute. At Gettysburg, Sallie became separated from the 11th in all of the chaos. Three days later they found Sallie guarding the bodies of the dead and wounded soldiers, herself unscathed. In 1865 at Hatcher’s Run Sallie was struck by a bullet to the head. She was killed instantly. She was buried on the battlefield while under heavy enemy fire. In 1890 the surviving veterans of the 11th Pennsylvania dedicated a monument on the Gettysburg battleground which contains a likeness of a sleeping Sallie.

Nemo the German Shepherd was a veteran of the Vietnam War. Unlike most of the dogs that served during that time, Nemo was allowed to come home. Nemo was trained to be a sentry dog at Lackland Airforce Base in Texas and was shipped to Vietnam in 1966. After his original handler returned to the US, Nemo was paired with Airman Second Class Robert Thorneburg. The two formed a close bond right away. On on December 3rd, 1966 after a night of fighting, Thorneburg and Nemo were out on patrol when Nemo sensed something. Before he could radio for backup, a Thorneburg was shot in the shoulder and Nemo was shot in the muzzle. The bullet entered under his right eye and exited through his mouth. Ignoring the wound, Nemo ran towards the 4 gunmen and allowed Thorneburg the time to call for reinforcements. Both man and dog were rushed in for emergency treatment. Nemo’s right eye had to be removed and he received skin grafts on his wounds. Eventually he was flown home to Lackland where he could receive the best Veterinary care. He lived out the rest of his life at the dog training facility on the Lackland Air Force Base. Nemo died on March 15, 1973.