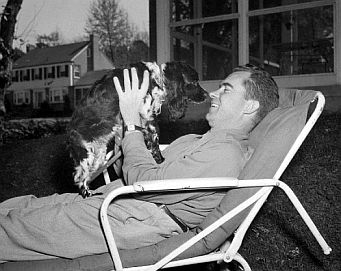 Annually celebrated on September 23, it is National Checkers Day which is also known as Dogs in Politics Day.

On September 23, 1952, Vice President candidate, Richard Nixon, gave a speech that was call the “Checkers Speech”. He had been accused of improprieties relating to a fund established by his backers to reimburse him for his political expenses. Wanting to defend himself as his place on the Republican ticket was in doubt, he flew to Los Angeles and delivered a half-hour television address. It was in this speech that Nixon stated that regardless of what anyone said, he intended to keep one gift; a black-and-white dog that had been name Checkers by the Nixon children, thus giving the speech its popular name.

The “Checkers Speech” was seen, or heard, by about 60 million Americans, including the largest television audience to that time and it led to an outpouring of public support.

With Checkers the dog in the speech, that is also how it come to share the name Dogs in Politics Day.