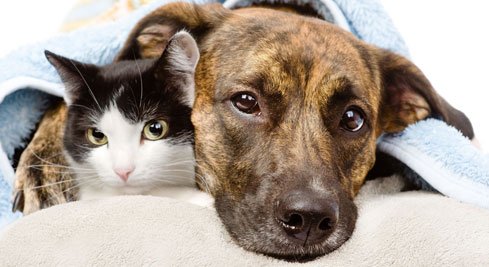 Most people are uplifted by the holiday season and anxious to share it with their household pets, however, a word of caution is in order. Playful, curious dogs and cats are often attracted to the bright, shiny surfaces of household batteries and it comes as no surprise that the holiday season is associated with an increased number of pet exposures. Batteries are seemingly everywhere during this time of year, especially in decorations, electronics, and toys, giving dogs and cats unlimited access.  In addition, visitors with hearing aids often leave these batteries loose on tables or bedside stands, forgetting that dogs and cats are attracted to them. Dogs tend to mouth and chew batteries while cats are more likely to bat them around in play.  Left untouched, batteries aren’t harmful, and in fact, most swallowed batteries pass through the gastrointestinal tract without incident.  If, however, a dog or cat damages one enough to cause leakage or swallows one intact and it becomes lodged or stuck in their esophagus the picture rapidly changes.

Injuries from alkaline dry cell batteries occur by two different mechanisms. When a pet chews or otherwise significantly damages a battery the corrosive electrolyte material leaks out resulting in skin or mucosal necrosis.  Alternatively, a disc type battery, if swallowed, may become lodged or stuck in the esophagus and cause burns by an electrochemical effect even if it is not leaking.  In human pediatric medicine, ingested disc batteries in the 12-25mm size range are associated with more serious outcomes and death. This is unlikely to be true in veterinary medicine due to the large variation in size and weight of dogs and cats and ingestion of any size disc battery is suspect.

Lithium disc batteries are noncorrosive, but far more dangerous than alkaline dry cells when lodged in the esophagus.  Electrochemical effects in these type batteries cause a very rapid onset of tissue necrosis and esophageal perforation.  It has been estimated that only 15 minutes of esophageal contact with a 3-volt lithium battery results in significant and life threatening damage.

Battery casings, the metalized film covering a battery, contain a variety of different metals such as lithium, silver, lead, and zinc. Heavy metal toxicity from ingested casings rarely occurs as most swallowed batteries generally passed through the gastrointestinal tract in just a few days.  Lodged pieces, in particular lead and zinc, have the greatest potential for metal toxicity.

Other potential hazards include choking or aspirating a disc battery and a foreign body obstruction. Many of the hearing aid batteries are so tiny that inhalation is an unusual, but distinct possibility. Foreign body obstructions can occur anywhere in the gastrointestinal tract if ingested battery pieces or casings become lodged. Most batteries or pieces that haven’t passed through the pylorus in 24-48 hours aren’t going to move any farther.

Making the diagnosis is usually not difficult. Sometimes the pet parent brings in or reports finding a well-chewed battery or mangled battery-powered device. In these cases, grayish black material present in the mouth, adhered to the teeth, or on the gums indicates that a battery has been destroyed enough to leak corrosive material.  If the battery is reported as missing, an X-ray taken from the oral cavity to intestines is used to determine whether it was swallowed and to pinpoint the location in gastrointestinal tract it.

The onset of clinical signs is rapid, generally occurring within just a few hours although occasionally signs may be delayed for up to 12 hours or longer.  Common early signs include redness around the lips and gums, grayish black material in the mouth and oral cavity, coughing, and retching or gagging. Later signs include dyspnea, respiratory stridor, vomiting a “coffee grounds” type material, blood in the stool, and a temperature elevation.

Treatment depends on the specific battery and whether it is has been chewed and is leaking or swallowed whole.  Those that have been licked or chewed leaving only wet, saliva covered, teeth marks and a non-leaking, intact battery do not pose a significant threat as long as the owner confirms that the battery and all parts are present. The mouth and surrounding skin should be washed with warm water and the animal monitored for the next several hours for signs of oral irritation (drooling, crying, pawing at mouth).  A veterinarian should be consulted if these or other signs occur.

A more serious problem arises when a battery has been chewed or otherwise destroyed and is leaking but not swallowed.  Cylindrical or rectangular batteries are the usual culprits in this instance.  Early at home intervention includes confirmation that all battery pieces are present and gently washing the mouth and skin with warm water. Emesis is not recommended; rather the pet should be examined carefully by a veterinarian.  Care is primarily symptomatic and supportive and may include, as indicated by the physical examination, irrigation of the mouth including the gums and tongue, clear liquids, soft diet, antibiotics, stomach protectants, and pain medication.

Animals swallowing a leaking battery need more aggressive care. At home treatment includes diluting the oral cavity diluted well with warm water and seeking veterinary assistance.  Emesis is not recommended.  The oral and pharyngeal areas should be examined well by the veterinarian for any evidence of irritation and necrosis and X-rays obtained to locate the battery, confirm the size, and identify any unattached pieces or parts.  Depending on where the battery is located, either immediate endoscopy or surgery will be required to remove it.  Baseline blood work, including a WBC with differential, is recommended prior to surgery.  The endoscopic oral route should not be used to remove leaking batteries and pieces as further tissue damage may result as the battery is removed.   Batteries and pieces present in the esophagus are generally best removed by using an endoscope to push them into the stomach and surgically remove them.

The most serious problem occurs when batteries, especially smaller disc batteries, are swallowed intact (i.e. no leaking) and become lodged in the moist folds of the esophagus.  Survey radiographs can be used to identify the battery’s location and guide therapy.

It is important to remember that while most battery ingestions are mild and do little harm to the animal, some do great damage and need considerable care and treatment.  In the event that assistance is required, the skilled veterinarians at Pet Poison Helpline are available 24/7 to provide information and help formulate a treatment plan.

If you think your pet may have ingested something toxic, call us immediately.