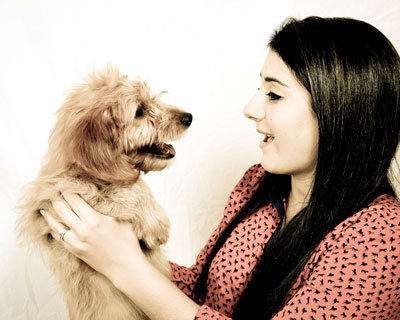 Researchers decided to look into this pet-directed speech, which is similar to the tone of voice used for human babies “known to engage infants’ attention and promote language learning.” In the first investigation of “potential factors modulating the use of dog-directed speech,” the research also aimed to determine its immediate impact on behavior. The study was published in the Proceedings of the Royal Society B last Wednesday, Jan. 11.

To find out how dogs reacted to human speech, researchers had 30 female volunteers read a script while looking at pictures of dogs—both puppies and adults. The script included common phrases like, “Who’s a good boy?” They also recorded as if speaking to another person.

Analysis of these recordings found that the human speakers used dog-directed speech no matter the age of the dog in the photo, but that when speaking to puppies, the pitch of their voice did go up.

The recordings were then played for 10 puppies and 10 adult dogs. Nine of the puppies reacted strongly, barking and running toward the loudspeaker even when the recording had been made for an older dog. The adult dogs, meanwhile, did not react to speech directed at puppies, older dogs, or humans.

“Adult dogs seem to ignore dog-directed speech at least when the voice is from an unfamiliar person,” said professor Nicolas Mathevon from Jean Monnet University in Saint-Étienne, France, who led the research.

To find out whether speaking to puppies this way could help them learn words, like speech directed at infants does, more studies will have to be done.