The Story of Lucky The Dog 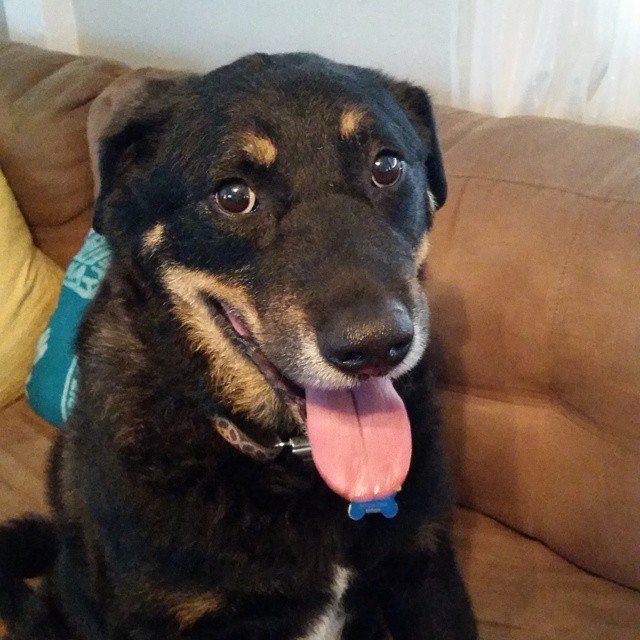 Posted on July 8, 2015 in Caring for your pet, From Our Clients, News, Tips & Advice, Veterinary Services

Meet Lucky ! He is one of Temple Terrace Animal Hospital’s recent success stories!

Lucky is a handsome male Labrador, Shepherd mix who is approximately 7 years of age. He came to our hospital with THE CASE OF THE MYSTERIOUS COUGH. Lucky’s family adopted him as a rescue and before adoption he was diagnosed with and successfully treated for heartworm disease. He always had an occasional cough that was considered to be due to his past heartworm disease as many dogs will have scar tissue in their lungs due to this disease, even after the disease is treated. However, in May of this year his cough rapidly and severely worsened. At that time he was brought to our hospital for examination. Due to abnormal lung sounds and the severity of the cough, it was determined by Dr. Armstrong that he needed x-rays. Potential causes for cough can include heart disease, tracheal collapse (common in smaller breeds), pneumonia, cancer, foreign material within the airways, and inflammatory disease such as with allergies/asthma and heartworms. Lucky had been on monthly heartworm prevention since he was treated and his recent heartworm testing was negative. X-rays would help to show the heart and lungs and better determine what might be the cause.

X-rays showed that Lucky’s heart was of a normal size and shape indicating that the cough was likely not due to heart disease. The trachea appeared normal and no foreign material was visualized. The lungs however had an abnormal pattern throughout all of the lung fields. The pattern fit most with either a pneumonia or an inflammatory disease however was not specific for one or the other. Lucky was started on antibiotics in case of Pneumonia however did not improve with the antibiotics. At that time Dr. Armstrong joined forces with an internal medicine specialist, Dr. Chris Ludlow. Dr. Ludlow is trained in endoscopy so he was able to perform the additional testing that Lucky needed to diagnose his lung disease. Dr. Ludlow travelled to our hospital so that Lucky could have his procedure done in a familiar environment and remain under the care of his regular Veterinarian. (Click on images below to enlarge) 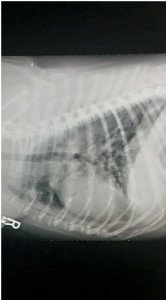 The day of the procedure Lucky was placed under anesthesia and Dr. Ludlow used an endoscope which he passed through a tracheal tube into the airways. Lucky was monitored throughout the entire procedure by multiple monitoring devices that measured vitals such as heart rate, blood pressure, oxygen levels, temperature, and respiratory rate. By monitoring these parameters we could make adjustments to anesthesia, fluids, respirations, or medications as needed to keep his vitals in normal ranges. The scope consists of a long slender tube with a camera on the end of it. The images are displayed onto a screen. With this we were able to view Lucky’s airways. Some of his airways had large amounts of mucous appearing material that were clogging them and some were inflamed and narrowed. To obtain samples for testing, a syringe that contained sterile saline was injected through the scope into the lungs and then the syringe was used to aspirate the fluid back out. The fluid that was obtained also contained the mucous debris and cells from the airways. These samples were submitted to a testing lab for 2 different tests. 1) Culture- culture is a test where the sample is placed onto a special plate for bacterial growth. If bacteria grows, the specific type of bacteria is identified and then different antibiotics are tested to see which one(s) will be effective in treating it. 2) Cytology- cytology is a microscopic evaluation of cells. Different types of cells are present with different types of disease processes and identifying the cells and their characteristics can help to reach a diagnosis. 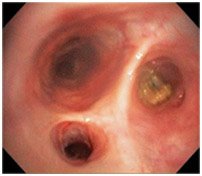 Abnormal Bronchoscopy: View of the airways/bronchi with mucous and inflammation

Normal Bronchoscopy: Airways are not inflamed and are open and clear of mucous

When Lucky’s test results came back it was determined that he did not have an infection (pneumonia) at all- no bacteria grew with the culture testing. The cytology showed that his disease was consistent with inflammatory allergic airway disease (similar to asthma in people). Now that we had a diagnosis we were able to form a personalized treatment plan for Lucky and his problem. He was taken off of antibiotics and started on a steroid medication. Steroids are a potent anti-inflammatory medication therefore work great for inflammatory disease. Steroids are not safe to use with infections such as pneumonia however as they can suppress the immune system and lead to the infection getting worse and out of control. This is why it was so important to reach a diagnosis before placing Lucky on steroids. Asthma is more common in cats than it is in dogs and if you have a coughing cat then there is a high chance of asthma. Special asthma inhalers are also available that are designed specifically for use in dogs and cats.

It was also detected with Lucky’s pre-anesthesia blood work that he had a disease called hypothyroidism. Hypothyroidism is a disease of low thyroid levels. This disease leads to low metabolism which causes lethargy/tiredness and inactivity, weight gain/obesity, and sometimes skin and ear infections. Lucky had also been diagnosed with an ear infection at the time his cough was evaluated. Lucky was placed on thyroid medication in addition to the steroids to help control his thyroid disease.

Just 1 week after Lucky started his medications his family saw a dramatic difference in him. He was not coughing at all and he was very active and happy- a completely different dog!!!! The steroids are being weaned down to a lowest effective dose and he will remain on his thyroid medication for life as this medication is controlling his disease. Due to his thyroid control he has lost weight which will be beneficial for his joints and overall health as he was overweight to begin with. Most families with dogs who have hypothyroid disease think that it is just their dog’s personality to not want to be active and to lay around a lot. As Lucky’s family discovered this was not the case with him- once his thyroid disease was controlled he was so much more active and happy and wanted to play with the family!!! They are enjoying their additional active time with him and are so thrilled that he is no longer effected by his cough. We are so happy that we were able to give Lucky a better quality of life with his family!!!

Lucky’s case illustrates the importance of obtaining a diagnosis instead of continuing to give medications without a diagnosis. It also shows that multiple tests may be needed to reach a diagnosis. Without a diagnosis Lucky’s cough would have continued because we would not have known how to treat him. Putting him on the wrong medications could have made the problem worse. It also illustrates the importance of screening blood work which should be done in senior pets (age 7 and above) once yearly. Without his blood screening we would have never known he had thyroid disease and that there was an active dog just waiting to feel livelier and show us his true personality!!!

Dr. Lacie Armstrong is an associate veterinarian and medical director at Temple Terrace Animal Hospital. She graduated with honors from Coastal Carolina University in South Carolina with dual degrees in Marine Science and Biology and a minor in Chemistry. Dr. Armstrong then attended The Ohio State University where she earned her degree in Veterinary Medicine. During her Veterinary education she completed externships in Marine Animal Medicine at Mystic Aquarium in Connecticut, SeaWorld in Orlando and the San Diego Zoo. Following Veterinary School, she completed a small animal medicine and emergency internship at Hollywood Animal Hospital in Hollywood, Florida.

In 2018, she attended the Chi Institute and obtained her traditional Chinese veterinary medical (TCVM) certification in small animal acupuncture which has been a rewarding therapy option to provide to her patients. She has also trained and earned medical certification in Penn Hip Radiology for Hip Dysplasia. She has special interests in internal medicine and soft tissue surgery.

Dr. Armstrong lives with her 2 rescue dogs Archie and Scarlet. Her interests include scuba diving, travel and photography. She is also an avid college football fan.