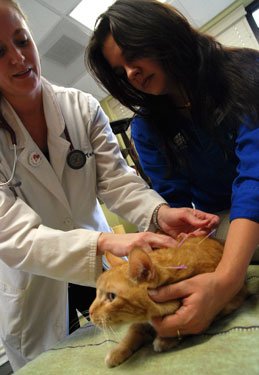 Acupuncture is a form of traditional Chinese medicine (TCM) that dates back more than 3,000 years. It has been used on animals almost as long: a manual on the use of acupuncture on elephants, thought to be 3,000 years old, was found in Sri Lanka in 1979.Over the centuries, practitioners mapped out a series of acupuncture points connected together like Christmas lights by pathways called meridians. Cats have 112 of these acupoints.

In traditional Chinese medicine, disease is viewed as the result of a blocked or excessive flow of chi, or life energy, through the meridians. Acupuncture is one of a variety of therapies including herbs, acupressure, exercise and diet, that TCM practitioners use to restore the proper flow of chi.

Acupuncture involves inserting very fine, filament-like needles at the acupuncture points. The needles trigger the release of endorphins, the brain’s natural opiates, which relieves pain and provides a sense of well-being. They also stimulate the acupoints, which can act on the nervous, immune, and endocrine systems.

TCM practitioners believe that in addition to any effect on body chemistry, the insertion of needles at the acupoints can stimulate or suppress the flow of chi and restore the body to balance.

The western approach to veterinary acupuncture typically involves inserting the needles in the region where the animal feels pain rather than in one of the traditional acupoints elsewhere on the body. Western vets use acupuncture most often for problems like arthritis, back pain, tendon injuries, hip or elbow dysplasia, and physical problems of the nervous system.

It may be hard to believe that a cat would sit still and accept having needles stuck in him. While some cats won’t tolerate the treatment, the vast majority of cats do. When conducted by a qualified, experienced practitioner, acupuncture doesn’t cause pain or distress.

Acupuncture needles are much smaller than a normal hypodermic needle, generally only 0.02mm wide, so they don’t hurt like injections or blood draws do. Sometimes there can be a slight initial prick, but this does not persist when the needle is left in the skin.

Because cats don’t anticipate and worry about their upcoming appointment, they have less stress, and therefore less pain, than a human might.

An experienced veterinary acupuncturist will be sympathetic to your cat’s needs. Techniques like using a minimal number of needles, inserting a few at a time, and letting the cat rest and stretch out between needles will make the treatment gentle and pleasant.

Acupuncture should not be used as an alternative to drugs or surgery for the treatment of severe or acute pain. It may not be appropriate for cats with cancer, either. As always, before you choose to undertake any kind of medical treatment, holistic or otherwise, for your cat, do your research and talk to people you trust — including your vet.

To find out more about feline acupuncture, check out Acupuncture for Cats by Lyndsey Wedemyer or Four Paws, Five Directions by Cheryl Schwartz.