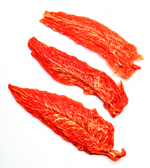 In the wake of an Australian Veterinary Journal article outlining a study of dogs exposed to dried chicken treats produced in China, the U.S. Food and Drug Administration (FDA) announced this week that it has received a total of approximately 3,000 reports of pet illness possibly related to the consumption of jerky treats, including 580 deaths.

The FDA has issued several warnings about jerky products imported from China since it first received reports of pet illness in 2007. However, despite ongoing efforts to identify a cause of illness, testing has been inconclusive.

Here’s what the agency does know: According to data collected since 2007, 60 percent of the reports involve gastrointestinal illness (with or without elevated liver enzymes) and about 30 percent relate to kidney or urinary signs. The remaining 10 percent of cases involve a variety of other signs, including convulsions, tremors, hives and skin irritation. About 135 of the case reports involving kidney and urinary signs were diagnosed as Fanconi syndrome, a kidney disease in which the proximal tubule doesn’t work properly and some nutrients are lost into the urine instead of being reabsorbed.

Despite the elusive search for a cause, the FDA says the rate of complaints associated with jerky treats dropped sharply after several well-known brands were removed from the market in January 2013. At that time, a study conducted by the New York State Department of Agriculture and Marketing detected low levels of antibiotic residues in those products, prompting the recall, but the FDA believes the drop in complaints is linked to decreased availability of jerky treats rather than antibiotic residue. And new reports do continue to come in.

As the FDA has been investigating the issue, other organizations have been conducting their own research. In September, the Australian Veterinary Journal published one of the largest chicken jerky studies to date. The clinical signs focused on in the retrospective study, conducted at the University of Queensland, centered on acquired proximal renal tubulopathy. Researchers collected and analyzed data from 108 dogs diagnosed with glucosuria with blood glucose <10mmol/L and fed KraMar Supa Naturals Chicken Breast Strips. As in the U.S. illness reports, proximal renal tubulopathy in Australian dogs was reported with increased frequency beginning Sept. 18, 2007. The first case was reported two weeks after KraMar Supa Naturals Chicken Breast Strips, made in China, were introduced to the Australian market.

In the investigation, researchers analyzed signalment, presenting signs, history of feeding treats, results of urinalysis and blood tests, treatment and time to resolution of clinical signs. Study authors concluded from the 17-month study period that the treats likely contained a toxin targeting the proximal renal tubules. However, a toxin has not yet been identified. In response to their findings, the study’s authors emphasize the importance of taking a careful dietary history—including treats—and performing urinalysis in sick dogs.

The FDA is also encouraging veterinarians—through a “Dear Veterinarian” letter—to report cases suspected of jerky treat-related illness and to collect the following data:

The agency is also requesting that veterinarians obtain a urine sample (10 ml if possible) from dogs or cats that may have illness associated with jerky treats and freeze it for Fanconi syndrome testing by the Veterinary Laboratory Investigation and Response Network (Vet-LIRN). The FDA says this testing will allow it to get a better idea of how many of the suspected cases involve Fanconi syndrome.

The FDA has also developed a fact sheet for concerned pet owners. Officials continue to caution pet owners that reports of illness from jerky treats are not limited to chicken products but also duck and sweet potato jerky products and jerky-wrapped rawhide treats. Consumers should also be aware that while reports seem to be linked to jerky treats sourced from China, manufacturers are not required to list the country of origin for each ingredient used in their products.

Although the FDA has stopped short of issuing a recall for implicated jerky products without a definitive cause of illness, it cautions pet owners about the potential dangers and continues to remind them that treats are not needed for a balanced diet. In the meantime, the investigation continues.

“As veterinarians, animal scientists and pet owners, we strive to make sure that the products FDA’s Center for Veterinary Medicine regulates are safe, effective and properly manufactured,” an FDA release states. “We understand the love and devotion pets provide, and we are determined to find the answer to this mystery.”

If your pet is showing any symptoms, please contact us immediately.