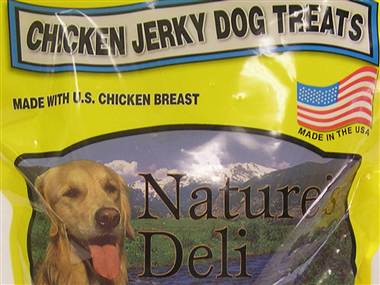 An American maker of chicken jerky dog treats has recalled 2.5-pound packages of the product because it may be contaminated with salmonella bacteria that could cause illness.

Kasel Associated Industries of Denver has voluntarily pulled its Nature’s Deli Chicken Jerky Dog Treats, which were distributed through 57 Sam’s Club stores in a dozen states.

The recall is not related to ongoing concerns about chicken jerky pet treats made in China, which have not been recalled, according to the U.S. Food and Drug Administration.

This is the second recall in as many weeks for Kasel, which last month removed from market packages of “bully treats” — pet snacks made from dried bull penises — because of salmonella contamination.

The new recall of jerky treats was launched after routine sampling by the Food and Drug Administration found salmonella in the finished products. The firm has stopped distribution of any lots that were possibly contaminated, according to a company statement.

The treats were distributed to stores in Colorado, Iowa, Idaho, Illinois, Kansas, Missouri, Montana, Nebraska, Oklahoma, South Dakota, Utah and Wyoming. No illnesses in pets or humans have been reported in connection with the recall, the company said.

Consumers who bought the 2.5-pound bags of dog treats are urged to return the products to the place of purchase for a full refund.

If your dog is showing any symptoms of illness, please contact us immediately.