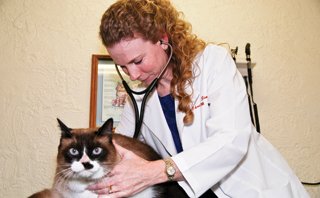 If you’ve ever been on a diet, you know it can make you cranky. Is the same true for our feline friends? Not necessarily, a recent study suggests.

Researchers from Cornell University College of Veterinary Medicine put felines on two different diets to see how much weight they would lose and if their behaviors towards their owners would change while dieting. All the cats lost weight. And although the dieting cats displayed behaviors such as begging prior to being fed, they also displayed more affection after they ate.

The study was published in the Journal of Veterinary Behavior on Nov. 30, 2015.

Fifty-eight cats were divided into two groups and put on different diets, one high fiber and the other low-carbohydrate and high protein. Weight and behaviors toward their owners was checked at four and eight weeks.

Regardless of the diet, all the cats lost weight at eight weeks. Also, of the cats that showed behavior changes, many reacted to the restricted diet by begging, meowing, and pacing prior to eating. Post-meal, the cats increased their affection for their owners by jumping on their laps and using the litter box.