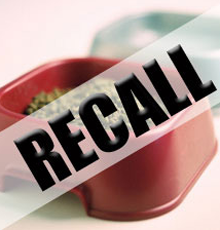 The U.S. Food and Drug Administration (FDA) is advising veterinarians, pet owners and the pet food industry to be aware that pet food and treats made with livestock gullets have the potential to contain thyroid tissue and hormones, according to an agency release. Pets that eat food or treats that contain thyroid hormones can develop hyperthyroidism, a usually rare disease in dogs that is typically triggered by thyroid cancer. Continued exposure to excess thyroid hormones can cause damage to the heart and, in some cases, death, the agency says.

The FDA is issuing the alert following an investigation by the Center for Veterinary Medicine into three reports of dogs from different households that showed signs of hyperthyroidism. In those cases extensive testing on the three dogs conducted at a reference laboratory showed elevated thyroid hormone in the blood but ruled out thyroid cancer, the release states. Symptoms of hyperthyroidism include excessive thirst and urination, weight loss, increased appetite, restlessness, hyperactivity, elevated heart rate, rapid or labored breathing, vomiting and diarrhea.

In interviews with the dogs’ owners, researchers found that all owners had fed their dogs Blue Wilderness Rocky Mountain Recipe Red Meat Dinner Wet Food for adult dogs, or Wellness 95% Beef Topper for Dogs. On the recommendation of the reference laboratory’s consulting veterinarian, those foods were discontinued for the three dogs. According to the release, the dogs’ clinical signs disappeared and their thyroid hormone levels returned to normal after the food had been discontinued for a few weeks.

The FDA tested unopened cans of the food and confirmed that it contained active thyroid hormone, which is likely from the use of gullets from which thyroid glands were not completely removed before being added to the food. WellPet, the maker of Wellness, and Blue Buffalo, the maker of Blue Wilderness, have both initiated voluntary recalls of select lots of the affected products on March 17, 2017. Click here for more information about the WellPet recall, and here for the Blue Buffalo recall.

Consumers should discontinue feeding either of the of the recalled foods and consult their veterinarian if their pet shows any of the symptoms of hyperthyroidism. Questions about whether a particular pet food or treat contains livestock gullets or thyroid hormones should be directed to the manufacturer of the product, according to the release.

The FDA has more detailed information about thyroid hormones in pet food in its Letter to Veterinary Professionals and Letter to Industry.