Why Punishment Fails; What Works Better 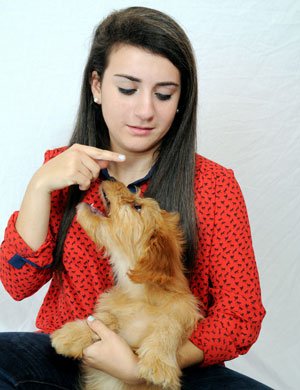 Punishing a dog often doesn’t work or can even make a behavior problem worse. Three important rules must be met for punishment to be effective.

Meeting all three of these criteria can be difficult. That’s why punishment often fails to solve behavior  problems and should not be the first training method of choice. Positive  reinforcement training, in which  animals are rewarded for appropriate behaviors, is safer and more  effective.

As seen in the two examples below, punishment teaches an animal what you don’t want it to do but fails to teach it what you expect of it.

Problem behavior: A dog gets on the furniture.

Owner’s response: Every time the owner sees the dog on the  furniture, she yells at it and threatens it with a rolled up newspaper. When she does this, the dog slinks off the furniture.

Result: The dog continues to get on the furniture, although it is less likely to do so in the owner’s presence.  Because the dog still gets on the furniture when the  owner is away, it is being rewarded part of the time for the unwanted behavior, and the first rule above is not being met. So the punishment does not solve the problem. If the owner gets increasingly frustrated with the dog,  she may increase the severity of the punishment, and  depending on the dog’s temperament, it may respond by  becoming fearful of the owner and avoiding her. Some dogs might even begin growling and snapping when the  owner approaches.

Suggestion: Success will be more likely if the owner  blocks the dog’s access to the furniture whenever she  can’t be around (e.g. confine the dog to a crate or a  different room in the house). Or the owner can make the furniture less appealing by covering it with plastic. Commercially available devices for keeping animals off  surfaces such as elastic mats, plastic mats with rigid points (or plastic carpet protector material laid upside  down) can also be used. A comfortable bed should also  be made available to the dog in the vicinity of the favored  furniture, and the dog should be rewarded every time it is  caught resting on the bed.

Problem behavior: A dog greets people by jumping on them.

Owners’ response: Whenever the dog jumps on its owners, they knee it in the chest or kick it.

Result: The dog avoids the husband (the largest man in the household; he has kicked the dog hard enough that it  is now afraid of him) but continues to jump on everyone else. Many dogs are highly motivated to greet people  by getting close to their faces. In most cases, kneeing or  kicking such a dog is less powerful than the dog’s desire  to greet people by jumping on them. In addition, since not all people the dog meets will knee it or kick it, the punishment doesn’t meet the first rule. The third rule is also not  met because the dog doesn’t always perceive the kneeing as punishment and, in fact, is reinforced for jumping  because it’s getting attention.

Suggestion: Rather than trying to punish the dog for  jumping, the owners should use positive reinforcement  to teach the dog to sit to greet everyone. Sitting is an alternative behavior that can be rewarded with petting or a food treat.

These examples highlight the fact that when the punishment criteria are not met, behavior problems can worsen, and the bond between the pet and the owner can be damaged beyond repair. When punishment is used incorrectly, it will appear unpredictable and confusing, so many  pets become anxious or fearful around the owner that  administers the punishment.When punishment is used in an attempt to train an animal that is already afraid or anxious, its fear and anxiety are  likely to worsen and may lead to aggression. If your dog is exhibiting inappropriate behavior, consult your veterinarian. He or she will help you develop an appropriate behavior modification program that focuses on using positive reinforcement or will refer you to someone with extensive experience in developing such behavior modification programs.