Tampa has officially gone to the dogs. Honest Paws ranked 50 cities to find the best and worst U.S. communities for your canine-pals and found Tampa was number one!

The site took nine factors into account when ranking the cities:

Honest Paws says Tampa has 15 dog parks, 52 pet-friendly breweries, and six dog-friendly beaches nearby with a few allowing dogs to frolic in the water and roam off-leash, helping it secure the number one spot on the list. Hillsborough County does not have a breed-specific legislation ban, also contributing to the ranking.

The city was happy to claim that ranking, tweeting about it Tuesday morning. 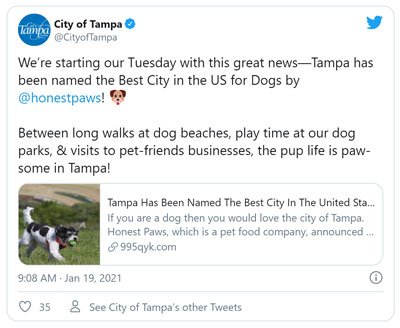 Orlando followed closely behind as the second-best city to be a dog, with Las Vegas, Richmond and Pittsburgh rounding out the top five.

The top five worst cities to be a dog according to Honest Paws were Milwaukee, Louisville, Columbus, Memphis and Detroit.