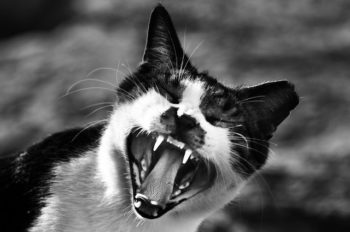 Feline aggression comes in many forms, but there are some innovative tips and approaches for cat owners who own warrior cats.

Veterinary behaviorist John Ciribassi, DVM, DACVB, shared thoughts at Fetch dvm360 San Diego on the reasons cats get aggressive and how cat owners can deal with this type of behavior.

Here are the major types of feline aggression and a few tips to manage them.

Redirected aggression. This occurs when a cat can’t get at a stimulus, so it goes after another family member, its aggression flipping on “like a light switch,” Dr. Ciribassi said. The remedy? Separate the cat from its target and reduce the new stimulus (for example, put up blinds to block the view of animals outside).

Consider counterconditioning and desensitization, as well as medications as needed. If supervised play between aggressor and victim helps, try it. But don’t hesitate to separate the two when unsupervised. Be careful not to let the situation ramp up into aggression from the victim, too: “Put yourself in the paws of the victim,” Dr. Ciribassi said, and be sensitive to the fact that suddenly that cat can’t roam freely anymore.

Territorial aggression. Cats aren’t like dogs; they don’t obey fences and consider a single, bounded territory their own, Dr. Ciribassi said: “Think of cats as moving around in a bubble. That determines the space between cats. They carry their territory with them.” A major trigger can be when two people join households and bring their separate cats together in a new environment. Dr. Ciribassi recommended the “House of Plenty” approach, with enough “core” areas around the house with food, water and litterboxes so that every cat gets space. If it’s an outside cat agitating the indoor resident, draw those blinds. Lorazepam in some cases can help calm an aggressor.

Fear-related aggression. This typically stops when the fearful stimulus disappears. But it can get worse when classical conditioning causes the aggressor to start associating fear with the victim all the time, every time. Separate the aggressor from the target, set up a “house of plenty” and consider anxiolytics. If all else fails, “set up the environment so the cats can live equally but separately,” Dr. Ciribassi suggested.

Petting-associated aggression. Some cats like to be petted for a time-and only a time. Cat owners need to learn the signs their cat sends when it has received enough pets. Some figure out how long a cat likes to be petted and stop well short of that point; Dr. Ciribassi called it “playing hard to get.” But everybody always wonders, why doesn’t a cat that doesn’t want to be petted anymore just walk away?

“Cats like to stay on a person’s lap,” he said. “If they can bite and remain comfortable where they are, they’re getting both the things they want.”

Play-related aggression. This often happens when a new kitten shows up and wants to play with an older cat that isn’t interested. Cat owners should provide plenty of other outlets for the playful cat’s energy: “That means long, feathery toys, not your body parts,” Dr. Ciribassi joked.

Be positive! Cats are unique-and put up with a lot from us

Last but not least, Dr. Ciribassi shared two thoughts in reframing your own thinking on feline aggression.

First, one study found that quick introductions of new cats to a household saw the same success rate as gradual and lengthy introductions. Turns out, he says, it’s really the cats’ personalities-and especially that of the resident cat-that makes for a successful introduction. Don’t get frustrated with cats that can’t get along despite all the best tactics. Sometimes, cats that need to live together but can’t do it peacefully need separate safe places to live inside the same house. If they can’t live together, don’t make them. “Most of these cats do really well,” he says, as the problem with aggression can outweigh the pleasure of the potential housemate.

Second, Dr. Ciribassi worked with cats in veterinary clinics for decades, and he hasn’t soured on the species. He’s not disappointed that so many cats hiss, scratch and bite in fear-related aggression-he’s surprised more of them don’t.

If your cat is showing signs of aggression and you need help managing it, please contact us. We work with several animal behavior specialists and can provide you with recommendations.

Posted on January 15, 2020 by tbvets
This entry was posted in behavior, News. Bookmark the permalink.