Tips For Introducing Your Cat To Another Cat 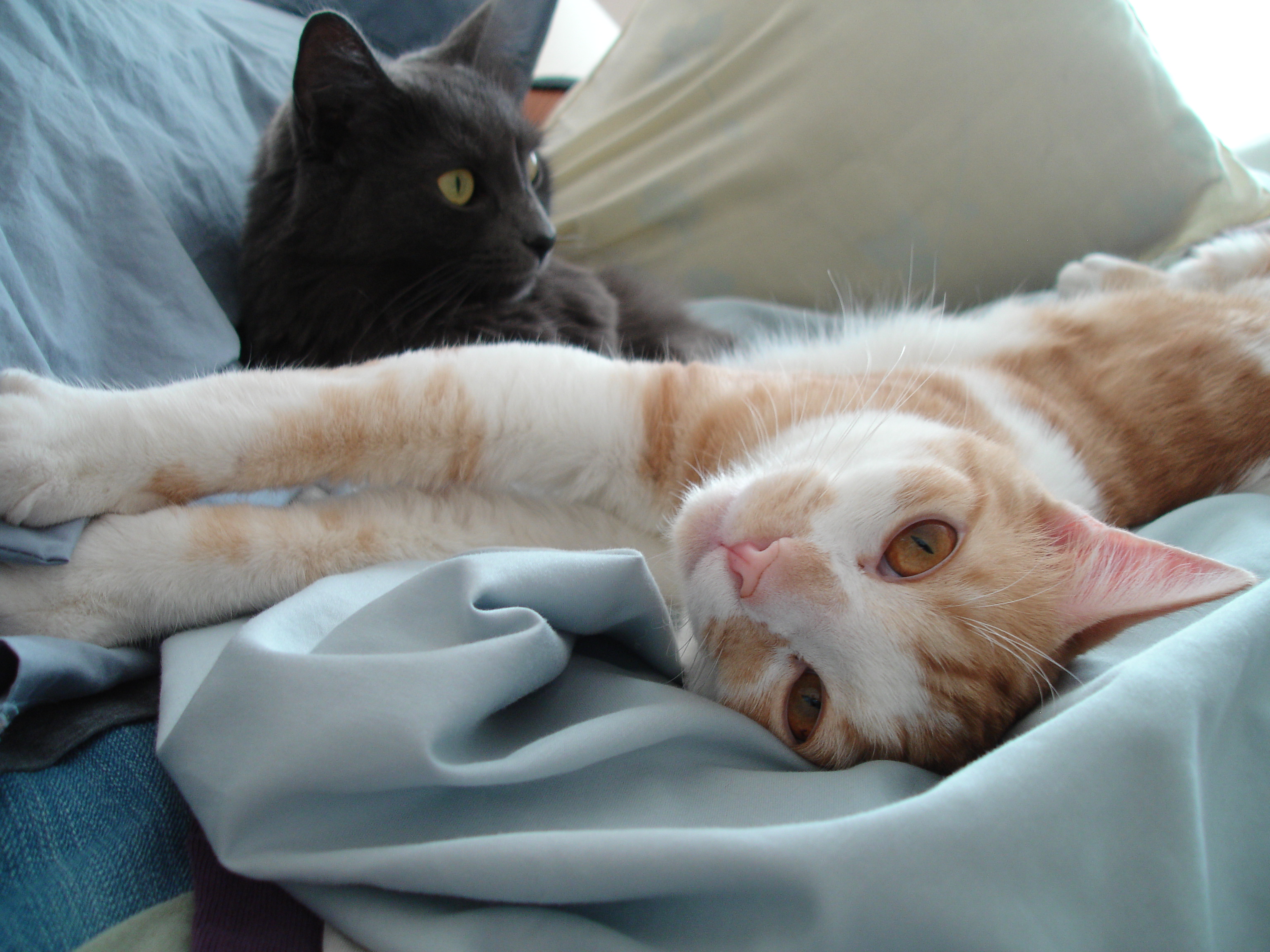 So you have a cat already and are adopting another cat ( : A carefully planned introduction is everything. Most cats do not readily accept a new member of the family; they need time to get used to the idea. It is important to have patience and not rush things along. A certain amount of hissing, posturing and chasing is to be expected. Don’t chance an all out fight: preventing a problem is easier than solving one. When in doubt, wait a few more days before proceeding to the next step.

Several factors need to be considered and balanced in a planned introduction; among them age, size, sexual status, and personality. Experience matters. A stray may be competitive, territorial and stand up for himself. An orphaned hand-raised kitten may grow up to be an easily stressed adult. This type of cat commonly is unable to make the adjustment of living with another cat. The more the situation deviates from the ideal, the more the introduction process should be protracted. The period of adjustment and creation of a new routine can stretch beyond the normal 6 to 12 weeks. If enough factors are in conflict, the cats will become adversaries rather than friends.

If this were an ideal world, the New cat (N-cat) would be younger and smaller than the Existing cat (E-cat). N-cat would be of the opposite sex (or both would be female), sexually immature or neutered. His personality would complement that of the E-cat. You would take your time interviewing all candidates and would be rational, not emotional during the decision-making process.

The reality is that many times choice is not an option. Roommates, lovers and spouses with cats come as a basic non-negotiable package deal; the humans agreed to cohabitate, the cats will have to manage. This type of introduction can be rough. Be prepared for a prolonged introduction especially if the cats have lived alone since kittenhood and have no experience living with another cat or the living space is particularly small.

Finding a stray on the street or falling in love at the shelter is another one of those unplanned events that can deliver a jolt to both you and your E-cat. Should you take him home just because fate put him in your path? A cat from the shelter or a rescued stray must be physically isolated from your E-cat for 10 days to 2 weeks to make certain that he is not incubating a contagious disease. A cat with an unknown background must be thoroughly examined for parasites and disease, FIV and feline leukemia tested, and vaccinated by a veterinarian before he can come into contact with E-cat Neutering before introducing is also recommended.

All introductions start with the same basic rules. The Newcomer must be isolated. The Existing cat, will have the run of the house except for the area designated as N-cat’s confinement area. The isolation area should be a room with a door that can be closed so there is absolutely no visual contact between the Newcomer and the Existing cat. You must be able to provide this type of space if N-cat is a shelter cat or a stray.

If air-borne diseases such as upper respiratory infections are not a problem and space is severely limited, a large cattery or kennel cage with a sheet over it will suffice. A spare room, your bedroom or a bathroom can be set up as the isolation room. Remember, E-cat should be inconvenienced as little as possible. If your cat is used to sleeping with you, you may have to use the bathroom. Suddenly denying E-cat this basic level of companionship will complicate the situation.

If you’re left with no choice except the bathroom and E-cat’s litter box is currently located there, move the box to a new quiet spot or create one with a privacy screen. If possible, do this at least two weeks before bringing the newcomer home. Planning ahead will minimize the chaos for E-cat.

The isolation area should be cat proofed and well ventilated. The simple set up should include a litter box, a water bowl and a cave-like hiding box lined with bedding.

Step One
Upon arrival, the newcomer should be brought directly into the isolation area. Don’t stop to chat with E-cat. Remove N-cat from the carrier and let him scope out the room. Don’t linger. Bring the empty carrier out with you. Put it down on the floor and proceed with your normal “just got home” routine.

Give E-cat a chance to discover and explore the empty carrier and respond. Watch carefully, but don’t interfere. E-cat’s response to the scent of N-cat can be telling. Some cats will posture, hiss and may even attack the carrier while others will stalk and growl, run off then return again and again. Still others will approach curiously and sniff with great excitement. Leave the carrier out until E-cat loses interest.

Spend at least an hour with E-cat before going back and peeking in on the newcomer. He’ll be just fine. He needs some alone time to explore; studies have shown that cats need to respond to environmental challenges before they can respond socially.

When E-cat winds down, slip into the isolation room with a small portion of food. Sit quietly. Talk softly. Do not actively solicit the cat. He’ll approach when ready. If he engages you, respond conservatively; don’t rush forward and scoop him up. Remain a half-hour to 45 minutes. Wash your hands if you’ve been petting, then leave without ceremony. Visit the newcomer several times a day.

E-cat may begin to hiss or growl at you; you smell like the intruder and he’s a bit confused. Continue with your normal routine. Note how much time E-cat spends sniffing around and sitting outside the isolation room’s door. Do not proceed to STEP TWO until all hostile responses to the scent, doorway and carrier have ceased.

Be sure to spend quality time with E-cat. Let him know he is still special. Play his favorite games. Groom him daily. Give him little bits of something yummy by hand. Make it intimate. Meanwhile, visit N-cat at least 3-4 times a day. Engage him or her in play if N-cat is willing. If in hiding, sit still and quietly talk or read to N-cat.

Step Two
Now that E-cat is accustomed to the newcomer’s limited existence, its time to move forward. The next step will allow them to see each other without full body contact. Stack two 36″ high-tension gates in the newcomers doorway. Rigid plastic mesh baby gates are available at most children’s specialty or department stores. If you have reason to believe that either cat will get over the 6′ gate set-up, use PLAN B. It is very important that the cats not fight. PLAN B: jam the door of the isolation room with two hard rubber door stops, one on each side with the door cracked open 2 to 3 inches. Make sure that neither cat can fit his head through the opening. Check that the door is secured and will not suddenly pop open or slam shut if a cat body slams the door aggressively. They will be able to touch noses, whack each other with their paws and investigate without full body contact. When you are not at home or unable to at least peripherally supervise, close the door. Do not proceed to the final step until the cats seem relatively calm in each other’s presence; hissing, posturing and growling should be at a minimum.

Step Three
Finally, you get to open the door! With E-cat occupied elsewhere, take down the gates or open the door. Downplay the situation. Don’t make a big thing out of it. Let the cats happen upon each other. Stay on the sidelines; don’t interfere. E-cat may stalk and chase the newcomer; this is typical territorial behavior. The newcomer may do the same if E-cat enters the isolation room. Do not leave them unsupervised.

If a catfight erupts, keep your hands out of it. Do not attempt to handle or pick up either cat. Clap hands and shout, bang a pot with a spoon, throw water, or anything to startle them. But don’t ever reach into a tangled mass of fighting cats. It always sounds much worse than it is. Cats yowl and scream, but if their nails have been trimmed prior to the event, damage should be minimal. Declawed cats have no alternative except to bite. When things have cooled down considerably, go over each of their bodies carefully checking for damage. Bites and puncture wounds can become infected and abscess. Call your vet if you suspect that an abscess is forming. If you must physically intervene during a particularly nasty fight, drop a large thick blanket or bath towel over the combatants. Scope up one and deposit him or her in another room behind a closed door. Allow for the adrenaline to subside before checking for wounds.

In some tough situations, another intermediate step is necessary. Here the N-cat will leave isolation and be set up in a cattery cage in E-cat’s territory. Both cat’s will be fed side-by-side; one in the cattery, one outside it. If one or both are too stressed to eat, put the bowls on the opposite sides of the room and move them a little closer each day. After 7-14 days, the introduction should be attempted again.

The complete process can take anywhere from several days (kitten to kitten/juvenile) to several months or more (adult stray to adult prima dona): a lot depends on how far you deviated from the ideal. You must watch for signs of stress. Eating food quickly and then vomiting, excessive grooming, sleeping and/or drinking are signs that someone is not happy. Spraying, indiscriminate urination and defecation, mewling and hiding behaviors are also associated with anxiety and stress.

Do not promote competition. Continue to feed in separate areas. Maintain the two separated litterboxes. Many E-cats have been known to block doorways and deny access to box or bowl. Don’t be in a hurry to consolidate. If a cat can’t get to his box, he will be left with no choice except to create a new toilet area!

Eventually, hostilities will decline. E-cat will stop the chasing and stalking and the newcomer will stop perching and scurrying along the edges of the room. They’ll declare a cease-fire. They may start to groom each other and share sleeping spots. At worst, you will have brief squabbles and a shaky truce. Hopefully, peaceful coexistence and mutual respect will be yours. And if you are lucky, they will become best
buddies.