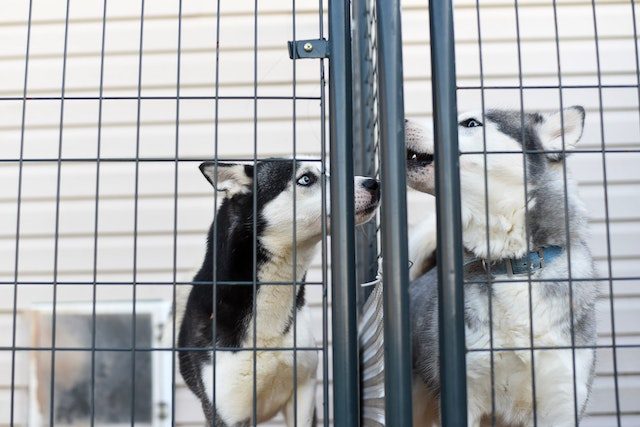 Our dogs are important members of our families. That’s why vets are asking owners to be on the lookout for “dog flu” as some shelters are seeing an increase in another highly contagious virus.

Canine Influenza, otherwise known as dog flu, is very similar to what we experience as humans. Symptoms include coughing, sneezing, eye and nose discharge, fever, lethargy, and trouble breathing.

“It’s transmitted through respiratory droplets,” said Dr. Holly Dutton, medical director at Veterinary Emergency Group Tampa. “So, essentially any type of contact from one dog to another. But interestingly, it also can be transmitted through what we call fomites or any type of leash or bowls that aren’t cleaned the same way. It’s not just spreading it from one to another. It can sit on areas for a little bit, but not that long. Someone can get it that way. But it’s going to be a lot of that nose-to-nose contact playing.”

A 2021 map from dogflu.com showed an outbreak of canine influenza cases last year, including Florida. Dr. Dutton stressed that right now, they are not seeing too many local cases but says cases could be on the rise soon once again in our state because of a recent outbreak in North Carolina.

As people travel with their pets for the holidays, they leave them in doggy daycare or boarding facilities and take them to places like dog parks, where they could be most at risk.

“There recently was a new outbreak in Charlotte, North Carolina. So prevalence is it’s not as common as it is in humans, but it’s definitely on the rise,” Dr. Dutton added. “There’s two strains. And essentially what happens is it starts migrating through the different states, and we start seeing it pop up. We had a big pop of it in 2021 here in Florida. And recently we have had a couple of shelters that have upper respiratory flu-like symptoms causing them to shut down, many are even pausing adoptions.”

That other virus with respiratory flu-like symptoms is another contagious illness called canine pneumovirus. In early December, Pinellas County Animal Services actually had to suspend operations after several dogs tested positive for pnuemovirus.

They had to treat their dogs and do a thorough cleaning before they could open back up.

With canine influenza, there are two different strains, and they actually haven’t been around that long. The first, H3N8, was reported in 2003, while H3N2 was first reported in 2015. Both types are highly contagious and spread easily from dog to dog. The H3N2 strain can even be transmitted to and from cats. However, neither type can be spread to or from humans.

While there is no vaccine for pneumovirus, there is for canine-influenza. Just like humans, social pups are often advised to get flu shots at least once a year. The symptoms for both are very similar, which is why it’s important to take your dog to get tested if they are feeling sick. Most dogs will recover after 2-3 weeks.

You can contact us regarding any questions, or request an appointment by clicking here.

Veterinary Emergency Group is open 24/7 and can take emergency phone calls as well.