Dogs could “go gray” due to stress 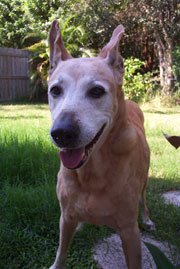 A recent study found that our dogs might have more in common with U.S. presidents than previously thought.

As the stress of the office seems to make U.S. presidents gray rapidly, stress and anxiety could also be causing premature graying in dogs.

In a study published in Applied Animal Behaviour Science in December 2016, researchers looked at younger dogs with gray muzzles and whether anxiety and impulsivity influenced that graying. In order to limit the study to dogs going prematurely gray and not those going gray with age, researchers looked at dogs from 1–4 years old. They further limited the pool by not using dogs where it would be difficult to tell the extent of graying on their muzzles, such as white dogs (Great Pyrenees), cream colored dogs (Golden Retrievers), gray dogs (Poodles), and merle colored dogs (Australian Shepherds).

Recruiting dogs through veterinarians, dog shows, and dog parks, researchers ended up with a sample size of 400 dogs. They took pictures of the dogs and then gave owners a 42-item questionnaire, telling them they were doing a study on dog lifestyle to avoid bias. Questionnaires also included distractor questions to keep owners from guessing the true purpose of the study.

Items in the questionnaire that tested anxiety included destruction when left alone; hair loss on vet exam or being in a new place; and cringes/cowers in response to groups of people. Questions on impulsivity included jumping on people, inability to calm, loss of focus, hyperactivity after exercise.

For the photographs, two raters not involved in data collection and with no access to questionnaire data rated the photographs of each dog using an ordinal rating. The rating went from “no gray” to “full gray.”

The results found a correlation between dogs with anxiety and impulsivity and premature grayness. “Essentially, the results indicate that for each standard deviation increase in the measured trait, either anxiety or impulsiveness, the odds of being in a higher rating category of muzzle grayness increase 40% to 65%,” Thomas Smith, a professor at Northern Illinois University’s Department of Educational Technology, Research and Assessment, told CNN. Smith was a co-author of the study.

These are the results after controlling for the dogs’ age, sex, spay/neuter status, size, and presence of medical problems.

More research still needs to be done to determine the full extent of the relationship, such as determining how much genetics might play a role in premature graying, but the researchers suggest at this point that veterinarians could look at premature graying and talk to clients about lowering their dogs’ stress and anxiety levels.