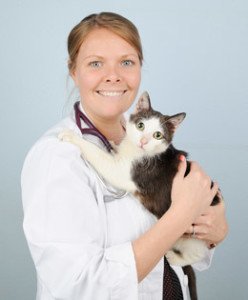 Myth #1: Cats are resistant to developing heartworm disease because they have a strong immune response.
Reality: Prevalence rates in cats are only up to 20% that of canine rates in the same endemic region. The national prevalence rate in cats is 16% based on serologic studies measuring positive antibodies to heartworms. Plus, prevalence rates are likely grossly underestimated because antibodies may subside over time.

Myth #2: Indoor cats aren’t susceptible to heartworm disease.
Reality: In the United States, 27% of cats infected with heartworms are indoor-only cats. Mosquitoes may enter the home through screened doors and open windows.

Myth #5: A negative heartworm antigen test rules out heartworm disease in cats.
Reality: A negative test result may occur because of a prepatent infection with immature worms less than seven or eight months after infection or with male-only infection.

Myth #7: An echocardiogram is not a useful test in cats since heartworm disease rarely causes cardiac disease.
Reality: Echocardiography is a complementary test to identify adult worms in the proximal pulmonary artery and main pulmonary artery branches, which may be seen in 40% of infected cats. It is also necessary to diagnose caval syndrome, a rare but life-threatening condition that requires immediate extraction of worms from the tricuspid valve.

Myth #8: Treatment of heartworm disease is the same in cats and dogs.
Reality: Adulticidal treatment with melarsomine in cats is contraindicated because it can lead to rapid worm death and subsequent death of the cat. Instead, heartworm treatment in cats involves the use of corticosteroids to decrease the inflammatory response to the heartworms in the lungs, bronchi, and pulmonary arterioles.

Myth #9: Heartworm preventives are only effective against early larval infections.
Reality: The different heartworm preventives have a variable retroactive efficacy, or reach-back effect, which means that if a preventive is delayed for a period of time it still may be able to kill larvae that have matured, if subsequent doses are given consecutively every month.

Myth #10: A heartworm test is necessary before starting heartworm prevention.
Reality: Don’t wait. There is no reason not to start a preventive if you have not tested for heartworm disease. Fewer than 20% of infected cats have circulating microfilaria, which exist for only one to two months.

Myth #11: Heartworm disease is a death sentence in cats.
Reality: Ten to twenty percent of cats with adult heartworms die. However, even if a cat survives the death of the adult heartworms, chronic pulmonary disease may persist. An Italian study showed that the probability of death was not related to the length of time a cat lived with the infection after diagnosis or to the presence of clinical signs—even cats that remain asymptomatic for more than three years are still at risk of dying of heartworm disease.

Posted on June 12, 2017 by tbvets
This entry was posted in Uncategorized. Bookmark the permalink.