Should My Dog Sleep in My Bed? 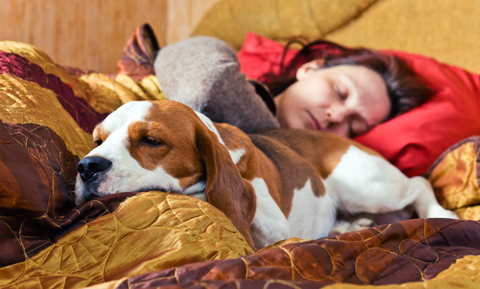 Pet owners everywhere ask this question. Some people say, “Yes”. Some say, “No”.  The real answer is: It depends.

What does it depend on?

Whether or not you allow your furry friend to sleep in your bed depends on his health and your health.

Point: If your dog has musculoskeletal issues, like arthritis, climbing on the bed can be a real effort, and soft beds don’t support aging joints well enough. Dogs in pain may prefer comfortable padding over a solid surface that’s low on the ground. Plus, older dogs may become incontinent. Weak, aged bladders leak when the dog lies down. Uh-oh…wet bed sheets!

Counterpoint:  If your arthritic dog is small, you can pick him up and place him on the bed. If he is large, you may provide a ramp or steps to make climbing on the bed easier. Placing doggie pads on the bed will keep the sheets dry, if your dog doesn’t wiggle off of them.

Here’s a behavioral plus of sleeping with your dog. Fido may spend lots of time alone while human family members go to work or school, and he may be feeling isolated from the family unit. Sleeping with his family can provide a much needed connection.

Point: Some people are specifically allergic to dogs. Prolonged close contact to dogs exposes them to pet dander and may result in respiratory symptoms. But even people who don’t have pet allergies can suffer increased allergic symptoms when co-sleeping with Fido. When dogs go outside to potty, dust and pollen clings to their fur and can exacerbate human allergies. And they may leave that dander, pollen, and dust on the bed coverings, so the allergic effects linger long after Fido leaves the bedroom.

Counterpoint: Wiping your dog with a damp towel before he comes inside is a good daily routine that will decrease the amount of outdoor pollen and dust he carries inside.  Bathing your dog, using HEPA filters, and frequently washing your bed linens will reduce your exposure to allergens, which may allow Fido to re-claim his spot on the bed.

“Some dog owners don’t sleep
as well with their dog in the bed.”

Point: Some dog owners don’t sleep as well with their dog in the bed. Light sleepers are awakened when their dogs roll over, kick, or scratch. Others are annoyed when their dog snores too loudly. Lack of sleep can make you grumpy and impact the immune system, which can affect your overall health. Dogs don’t suffer from lack of sleep, even when they have a restless night, because they have time to nap during the day and make up for lost nighttime slumber.

Counterpoint: Training your dog to sleep at your feet may minimize the disruption if he moves during the night. Many dog owners feel more secure and actually sleep better when snuggled next to their furry friends. Dogs tend to calm a person and can lower blood pressure and stress levels.

Dogs also provide a sense of safety. Heavy sleepers may rest better knowing that their canine companion will warn them of a nighttime emergency, such as a fire or intruder. Dogs help insomniacs rest better, too. People who have difficulty sleeping report that the rhythmic breathing of their dogs helps them to sleep. And people who ordinarily sleep alone feel better lying next to a warm living being. Whatever the reason, if a dog helps a person sleep better, that’s a significant health advantage.

Point: Dogs carry certain intestinal parasites, fleas, and ticks that cause human illnesses. Sleeping with a dog increases human exposure to these parasites and vector-borne diseases. Very young, very old, and immuno-suppressed people are particularly at risk of infection.

Counterpoint:  Your veterinarian can prescribe year-round, broad-spectrum parasite control that can protect both your dog and you from parasites and vector-borne illnesses.

Do I want to sleep with my dog?

If you do, you are in good company. Lots of people allow their dogs to sleep on their beds without any problems at all. A survey by the American Pet Products Association found that almost half of dogs sleep with their owners, so sharing beds is a popular practice.

Size matters when it comes to sharing the bed. The survey noted that 62% of small dogs were allowed to sleep with their human families, as compared to 41% of medium-sized dogs and 32% of large dogs. It appears that humans are willing to share their beds…just not too much of their beds!

Does my dog want to sleep with me?

Now let’s consider the dog’s perspective. Some dogs get too hot when sleeping in a bed and prefer to lie on a cool floor. Others like to change sleeping quarters several times a night—sleeping first on the kitchen floor, then the bathroom rug, then the sofa. Sleeping at ground level makes this easier. Also, some people are restless sleepers and disturb their dog’s slumber!

Some dogs want to sleep on the bed, but not with their owners! They take ownership of the bed a little too seriously. If your dog guards the bed or guards a human family member too forcefully, his aggressive tendencies may buy him a ticket off the bed!

Should my dog sleep in my bed?

Dogs usually understand they are not the boss of the family. Part of that social structure relies on the fact that people tower above dogs. When lying down on the bed, a dog and his owner are on the same level which may encourage the dog to exhibit aggressive tendencies.

Some dogs aren’t aggressive, but simply overreact when startled. If you roll over in bed and startle your pet, he may not intend to bite, but an unintentional bite hurts just as much as an intentional one.

But, if you and your dog don’t have health issues or behavioral issues that would make sleeping together an unhealthy situation for either party, co-sleeping should be just fine. Sleep well!