From Our Clients: Dr. Lassett To The Rescue! 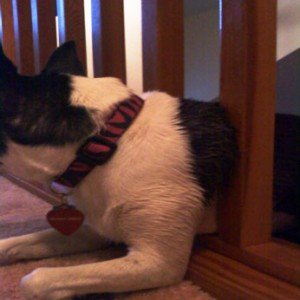 “How can a 25 pound dog thrust herself through the railings of the stairs when the opening is only four inches wide? Florida thunderstorms really take their toll on her, poor thing. She got herself in this predicament last month and all the efforts tried in releasing her failed miserably! Thank goodness for Dr. Lassett at North Bay Animal & Bird Hospital – he and an assistant came to the rescue after seeing this picture and made sure she remained calm while efforts were made to release her from this situation. In the end a railing was cut to allow her to be released – and Dr. Lassett looked her over and said she was very lucky that she did not hurt herself. I have taken all our animals to North Bay for their care and cannot say enough good things about them – wonderful, friendly & helpful staff. Many thanks to the awesome people at North Bay Animal & Bird Hospital in Tampa!”

Posted on October 13, 2011 by tbvets
This entry was posted in From Our Clients, News, Veterinary Services and tagged dog, dogs, vet services. Bookmark the permalink.